HomeKrantiGiving Voice to Marginalised Women is What Chalo N ...
March 1, 2017 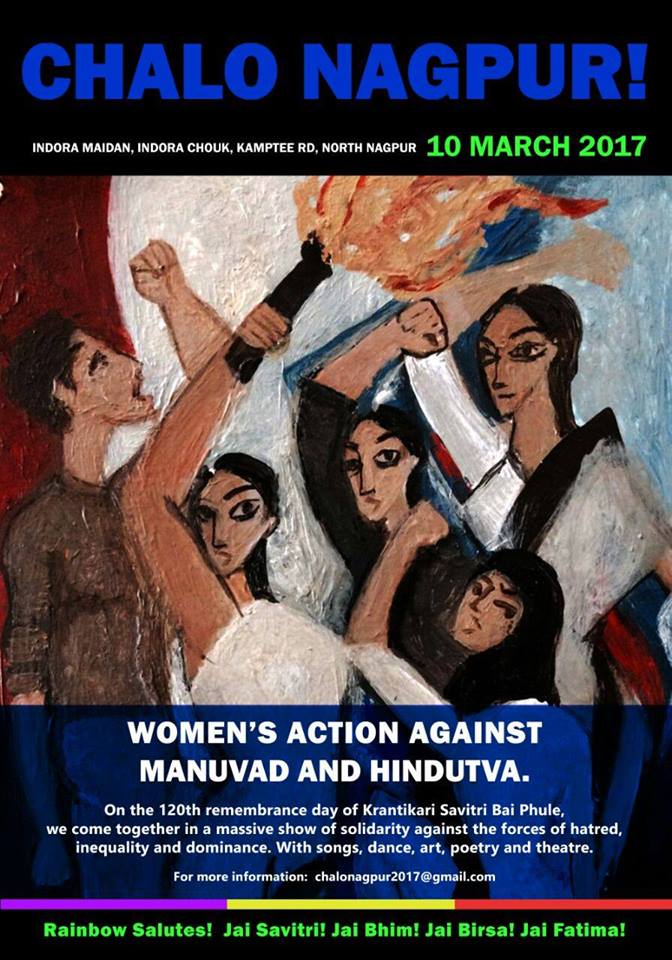 On 10th March 2017, women leaders from marginalised communities are going to gather at Nagpur to protest against the ever-growing attacks on minority groups by Hindutva right-wing organisations in what is being called Chalo Nagpur.

They are expecting anywhere between 5,000 and 10,000 women to join, responding to the atrocious gender violence perpetrated on Surekha Bhotmange, Jisha, Delta Meghwal, Soni Sori, Muslim women in Mewat and Muzaffarnagar, and the sexual violence against Adivasi students in Buldhana and Kurukshetra.

Nagpur is of course, where the RSS headquarters are located, and 10th March is also Savitribhai Phule’s — who educated women and protested strongly against casteist beliefs — 120th death anniversary.

Manjula Pradeep, who was the executive director of Navsarjan, Gujarat’s largest Dalit organisation, and one of the organisers of Chalo Nagpur, calls it an intersectional attempt to bring women from different backgrounds to the forefront of leadership to protest what marginalised communities experience in India. By bringing together women who, apart from being discriminated based on their gender are also discriminated against based on caste, class, religion, disability, sexuality or because they are sex workers, Chalo Nagpur is meant to be a reminder that they will not keep quiet.

The decision to hold Chalo Nagpur (which was initially supposed to be held only in Delhi), was taken by women leaders from these various marginalised groups last year. The idea, it seems, is to also provide platforms from which minority women leaders can be heard — we do know after all how even within left-wing minority movements in the last year, the voices of women protestors have sometimes been considered less important.

On 3rd January, the women organising the event began a social media campaign that called on all women and transwomen who come from Dalit communities, minority religions, and those belonging to the queer community to tweet and post videos of why themselves talking about why they are against Hindutva factions and Manuvad. Rituparna Borah, a queer feminist activist who is also organising the protest says that the women’s movement in India has until now been very scattered and often doesn’t encompass issues faced by minorities — there haven’t been enough intersectional movements across the country. In Chalo Nagpur, the women have come together despite differences in caste, religion, sexuality and work, she says, to ensure their voices are heard.