HomeWatchlistCinemaTiaras Will Never Be the Same Again: Why the New M ...
October 17, 2016

I wish I could go back to the day in 2014 when I first saw the music video ‘Love Charger’.

It was thrilling: I saw a rotund, hairy man who looked like Gimli from Lord of the Rings in a costume best described as Shaktimaan-meets-Earth, Wind & Fire, singing to an audience that looked like they were pasted in from some other video, wailing with intensity that I was his “love charzerrrr”.

See, I love B movies. I love silly YouTube videos. I know my Gunda from my Khooni Dracula, and my Bhim Niroula from my Venu Mallesh. I’m aware that part of my interest in them feeds a mean, class-driven impulse; that the so-bad-its-good appeal is because I see them aiming for sophistication, and failing at it. But I also genuinely love some of the people who have achieved YouTube infamy, like Jacintha Morris for her sharp observations and for singing about an oppressively judgmental society in ‘Suzann Sinner’, or Taher Shah for allowing himself be to vain about his long, wavy hair and for wearing a tiara and long purple robe.

I felt fondness for the man in ‘Love Charger’ for being in a flashy multi-coloured outfit that didn’t disguise his extremely hairy upper arms, or a bejewelled headpiece over his long, flowing hair. I adored him for (what I saw as) extending the boundaries of masculinity. But all that was before Messenger of God came out. 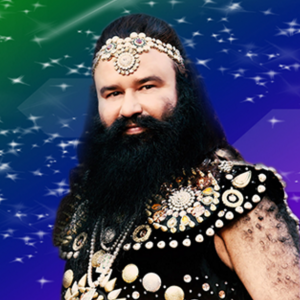 When I first read about a new movie in 2015 called Messenger of God and recognised its hero as being Gurmeet Ram Rahim Singh Ji Insaan, the man from ‘Love Charger’, I excitedly went to look him up. My glee was short-lived: I immediately found Neha Dixit’s 2009 profile on him in Tehelka, in which she reported on his violent reputation and closeness to the militant Gurjant Singh Rajasthani of the Khalistan Liberation Force (KLF). Ram Rahim came to power at the Dera Sacha Sauda, a Sikh religious sect in Sirsa, Punjab in 1990 and took on the title of Hazoor Maharaj Sant Gurmeet Ram Rahim Singh after Rajasthani put a bullet into the forehead of his predecessor.

Dixit also wrote that alleged malpractices at the Dera were exposed in 2002 after a woman wrote anonymously to the Prime Minister, accusing Ram Rahim of rape and mass-scale sexual exploitation. “There are 35 to 40 girls here who have compromised themselves at the Dera. We appear to be devis, but are treated like prostitutes. […]My life is in danger, so I will not reveal my name,” she wrote.

Ram Rahim has since become an accused in the murder of the woman’s brother in July 2002, “allegedly for carrying her letter to the PM,” and has an ongoing rape case against him involving two victims. (A fortnight ago, the Supreme Court stayed proceedings in the rape trial for a few days.) Apart from rape and murder, Ram Rahim is accused of ordering the castration of 400 of his followers.

Knowing this, the trailer for MSG: The Messenger of God, reeking of megalomania and machismo and hero-worship, didn’t seem so funny, never mind the crazy costumes and stunts and terrible production quality that was evident right from the trailer (the kind of stuff that usually reels me in). Then came MSG 2: The Messenger, in which Ram Rahim battled Adivasis who were “neither man nor animal”, but “shaitan”. Said ‘evil’ spear-wielding Adivasis looked like they’d been rubbed with mud and charcoal to darken their skin and wore animal-print loincloths. I was horrified by the trailer, not least because it reminded me of the terrible casteism and racism of Bahubali, in which the hypermasculine hero fights a similarly blackened, supposedly barbaric people.

MSG The Warrior: Lion Heart, which released recently, promised nothing less than a battle with aliens. But I cannot describe the rage I felt when the film began, sitting in a Bangalore theatre amidst a sea of men. The movie starts with a ridiculous scene purportedly at the India-Pakistan border, where Ram Rahim kills all the Pakistani soldiers, and then the film flashes back 300 years to Ram Rahim playing the commander of an army that slaughters Muslim soldiers (whose leader wants to rape a group of Hindu women). Even with swords that looked like they were made of cardboard, gooey fake blood and acting that wouldn’t have cut it in a junior school play, it was a horrifying scene to watch for the sheer hatred directed at them. And it’s scary that this blatant communalism sailed past the Censor Board.

Later, when the film showed a group of Muslim men (we are supposed to know they are Muslim because they wear skull-caps, sport kohl, and attempt terrible impressions of B-grade villains) manhandling a bunch of pure white cows, Ram Rahim saves the cows and sends the Muslims running in terror. It isn’t clear in the film whether the Muslims and aliens are separate villains, or if the Muslims are actually aliens in disguise. But given the reality of the Dadri lynching and the current attacks on Dalits and Muslims over beef across the country, giggling at a film like this, even scornfully, is impossible.

Moreover, Ram Rahim, alleged rapist in real life, announces in MSG: The Lion Heart that he will do anything to protect his two sisters. They are supposed to be able warriors, but they still need their brother to save them (and are always on either side of him but two steps behind, so they don’t hog the camera). In the scene where he tells his wife that he will give up his life to save women (he’s the “rakshak” of not just his country, but the whole world, we are constantly reminded), she is sitting at his feet, dutifully massaging his legs. Even before the film showed us a Bahubali-inspired waterfall in one scene, its gross machismo and hero-worship had all fallen into place. That the film is advertised as a ‘baap-beti jodi’ (the film is co-directed by his daughter Honeypreet) and includes his female relatives does nothing to redeem it.

Reviewers of MSG: The Lion Heart have laughed at its tackiness, much in the way the media laughed at Taher Shah’s latest song ‘Angel’. Few flagged the Muslim-hating and Hindutva-glorifying stuff, choosing to see Ram Rahim and his film as objects of ridicule instead. Barely any reportage on the film refers to the cases of rape and murder against him. Or to the fact that in February this year, comedian Kiku Sharda was arrested merely for mocking him.

With MSG: The Lion Heart, I didn’t care about the blinged-out costumes, or the soundtrack ripped off in parts from Game of Thrones, or the film set that looked like Bangalore’s Kemp Fort, or Ram Rahim’s wig of cascading curls, or even the fact that the hair on his upper arms and chest had been neatly shaved off in the third movie. The undisguised Islamophobia, the chanting of Ram-Ram and Om and Mahabharat references (so puzzling because Ram Rahim is Sikh), the disgusting, unabashed patriarchy hiding behind the fig leaf of ‘women’s empowerment’, are terrifying reminders of the world I currently live in.

In the way that we can choose to laugh at Baba Ramdev — fellow member of the Extremely Hairy Club — showing us his butt on the cover of India Today instead of paying attention to his multi-crore business expansion, in the way we chose to laugh at Donald Trump rather than take his political ambition seriously, we can choose to laugh at Ram Rahim’s clothes and pronunciation and delusions of grandeur and forget the allegations of criminal activity against him. But I believe treating Ram Rahim as a furrier version of Taher Shah won’t cut it.