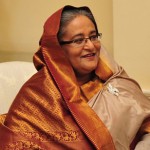 In the latest bit of crazy politicianspeak to amuse leddis all over India, we found out that Prime Minister Narendra Modi believes being female is some kind of affliction. (In his general attitude to women, Modi’s got company.) He said he was happy that Sheikha Hasina, Bangladesh’s Prime Minister, was tough on terrorism, “despite being a woman.” And lo! A hilarious Twitter hashtag was born.

Meanwhile, a record number of women have been elected to Turkish Parliament – they now occupy 17 percent of seats in Turkey’s Grand National Assembly.

Heard of that Nobel Laureate biologist Tim Hunt who thinks women scientists cause trouble (cause they fall in love with dudes like him and cry)? We can’t help poor uncles like him (even though he’s now resigned from the post he holds at UCL). But plenty of #distractinglysexy women in science shredded his comments with delight. For a peek into what Indian women in STEM have to deal with, read this.

It’s just really hard working in a coed lab because I’m too distracting to the male scientists #distractinglysexy pic.twitter.com/9cZMUpy6TL

Remembering Soumya Vishwanathan, the Delhi journalist who was shot dead by a group of men while driving home from work in 2008. And remembering Jigisha Ghosh, who was shot by the same men in 2009, and whose parents are being threatened in order to make them withdraw the case.

Somnath Bharti’s wife Lipika has accused him of domestic violence. The AAP says it will investigate, but called it a “private” matter. And this news report begins with the odd comment that Lipika’s allegations “may not be entirely misplaced”. Why start with the premise that her account is untrue?

Don’t miss this thorough exploration of the multifarious, uncomfortable, sometimes contradictory, narratives surrounding the Birbhum gang-rape, which reminds us not to tailor these narratives for the sake of convenient explanations.

Are you pissed off at Elinor Burkett’s New York Times story complaining that the trans movement is too focused on biology? We cannot able to start on what’s wrong with TERF-variety feminism.

In #2fingerfraud news this week, the Delhi government issued a circular allowing the two-finger test for examining sexual assault victims. Luckily, the next day, with some seriously stinky egg on its face, the government withdrew the circular. Here’s why the test is so awful in the first place. And why the government’s confusion about it is so worrying.

Have you been following all the football action for the Women’s World Cup? Check out our FIFA 2015 blog, yo! We’ve got personal accounts and exciting stats, and plenty more coming up in the month to follow. (Oh, and by the way, FIFA, your sexism is showing.)

Remember our list of feminist documentaries you shouldn’t miss? Here are more!

One Response to “The Finger Wrap: Hashtags, Hungry-for-love Scientists and Hazy Govt Logic”